Radio Astronomy is the study of radio waves produced by a multitude of astronomical objects such as Sun, planets, pulsars, stars, star-forming regions (i.e., birthplace of stars), gas clouds, galaxies, supernova remnants, etc. The high sensitivity of the Arecibo radio telescope allows astronomers to detect faint radio signals from far-off regions of the universe. A brief description of some of the exciting research done with the Arecibo telescope is given below.

Fast Radio Bursts: Brief radio pulses from space, known as FRBs (Fast Radio Bursts), are a new, perplexing cosmological mystery. We can infer from the properties of the radio signal that FRBs are very far away (many of them are believed to be located outside our Galaxy), but the origin and emission mechanisms of these short-duration signals are still not clear. The first repeating FRB was detected at Arecibo Observatory, and scientists continue to search for and characterize these fascinating phenomena.

Heliophysics and Space Weather: Our Sun is constantly releasing streams of high energy charged particles, known as the solar wind. In the near-Sun region, the solar wind is accelerated to about 3 million kilometers per hour and fills the entire solar system. Occasionally, the Sun exhibits transient phenomena, e.g., coronal mass ejections, which disrupt the solar wind flow and cause impacts at the Earth’s magnetosphere. Such space weather effects can affect space-borne and ground-based technological systems, on which we depend in our daily lives. Heliophysics is the basic science for understanding the solar wind and space weather. The multi-frequency interplanetary scintillation studies with the Arecibo Telescope provide a wealth of information about the three-dimensional view of the solar wind and are also useful to track space weather events.


Pulsar Studies: Radio pulses from the magnetic poles of rotating neutron stars (pulsars) provide insight into the physics of these fascinating objects. The second fastest known pulsar – the first millisecond pulsar to be found – was discovered at Arecibo, as were the first exoplanets, which were found orbiting a pulsar. The 1993 Nobel Prize in Physics was awarded to Russell Hulse and Joseph Taylor for their work with Arecibo in monitoring a binary pulsar, providing a strict test of Einstein’s Theory of General Relativity and the first evidence for the existence of gravitational waves. Today, pulsars are being used to directly search for low-frequency gravitational waves through incredibly accurate timing with the Arecibo telescope.

Spectral line studies: Light and matter interact in ways that produce very distinct frequencies of light known as spectral lines. In fact, spectral lines are so distinct that they are different for every chemical element or molecule. Astronomers are using the Arecibo telescope to observe these chemical fingerprints to characterize the composition, motion, and a plethora of other properties of different objects in the Universe, including galaxies near and far, stars, gaseous nebulae, icy comets in our Solar System, the interstellar medium of our own galaxy, and even exoplanet atmospheres.

VLBI: Very Long Baseline Interferometry (VLBI) uses multiple radio telescopes across the globe or telescopes in orbit around earth to coordinate observations of astronomical objects such as active galactic nuclei, celestial masers, pulsars, FRBs and transient sources. The Arecibo telescope brings uniquely high sensitivity to very long baseline interferometry networks, which has enabled scientists to localize the first repeating FRB, accurately measure distances to star forming regions, and to study some of the most compact but brightest objects in the Universe.

The Radio Astronomy Group at Arecibo consists of scientists who are not only users of the telescope but who use their expertise to help other users to plan and carry out their observations. Arecibo is an “open skies” facility, meaning it is not used only by our own staff but by scientists from all over the world. Observing time is assigned between competing proposals on the basis of evaluation of their scientific value by external referees. The Radio Astronomy Group makes sure that all users have access to the expert knowledge needed to make the best use of their observing time.

The Arecibo Observatory has operated undergraduate internship programs since 1972. AO hosted one of the first astronomy Research Experience for Undergraduates (REU) programs, funded by the National Science Foundation (NSF), and has continued to host them since 1987. The AO REU program is currently funded by the NSF to support active research participation by undergraduate students and teachers. + Read More

We are very excited to host a hybrid school this year in which participants may attend in person at the Arecibo Observatory in Arecibo, Puerto Rico or virtually. The school will include lectures on the fundamentals of single dish radio astronomy as well as a variety of hands-on, guided research projects that make use of the 12-m radio antenna at AO, the 20-m radio antenna (remotely) at GBO, and the extensive AO data archive. + Read More 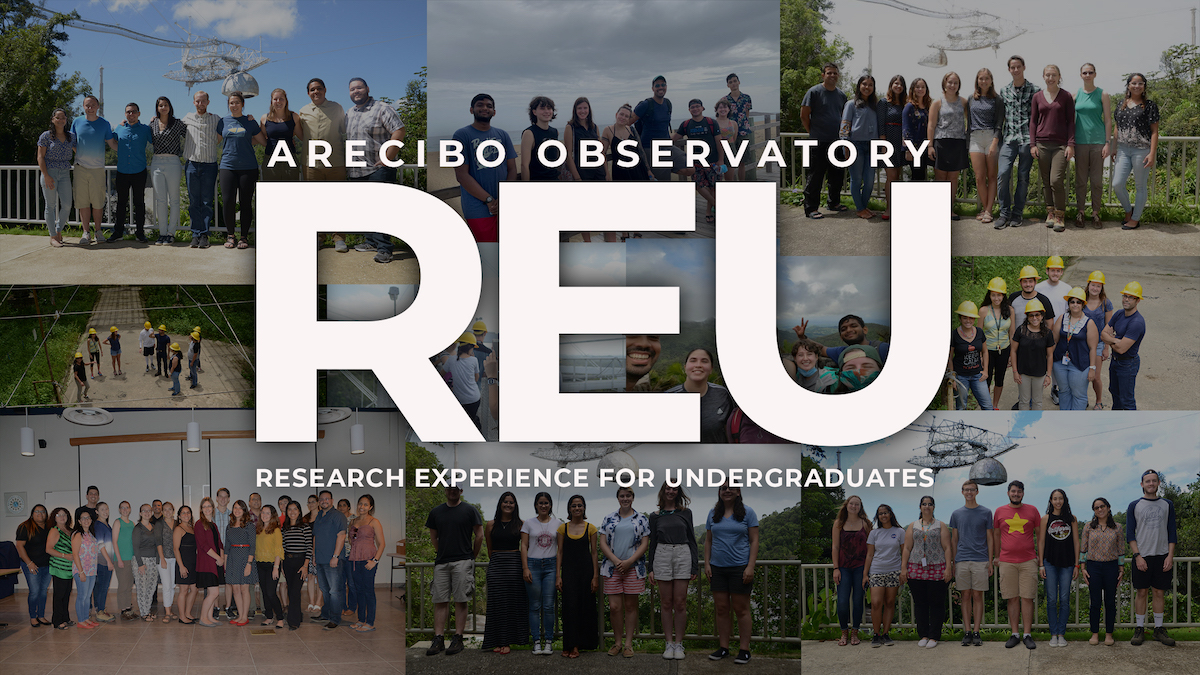 The Research Experience for Undergraduates (REU) program at the Arecibo Observatory has received funding from the National Science Foundation for the next three years, continuing its decades-long tradition of training scientists and engineers at the facility each summer. The Arecibo Observatory was one of the first astronomy REU sites and has been hosting the program since 1987, though AO has operated undergraduate internship programs onsite since 1972. + Read More