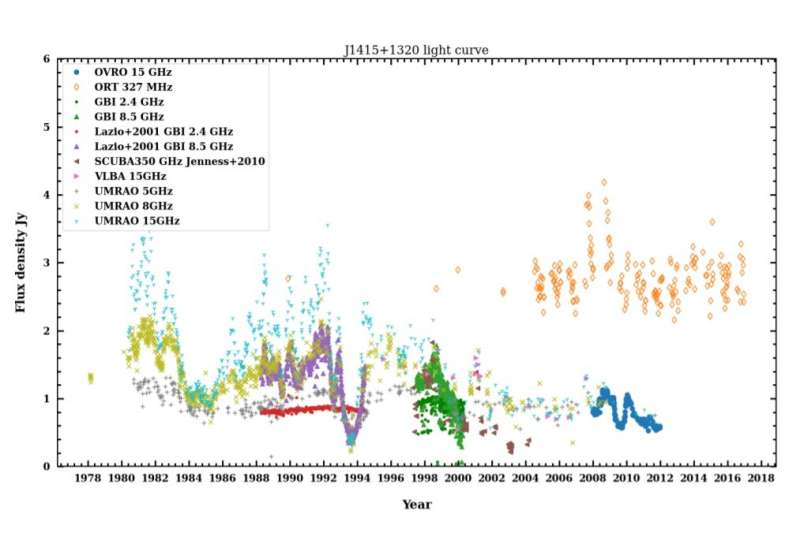 ABSTRACT
J1415þ1320 is a well-studied blazar that exhibits strong flux density variability at a wide range of radio frequencies (2.4 GHz to 230 GHz). In this article, we present a variability study of this source at 327 MHz using data obtained with the Ooty Radio Telescope during the period 1989 to 2018. Two significant flares were detected, at epochs 2007.6 and 2008.6. These flares are also seen in the publicly available 15 GHz and 37 GHz light curves, but with a lead time of a few months. The fractional changes in the flux densities are larger at frequencies . 15 GHz compared to those at 327 MHz, and during these flares the spectral indices of the increased flux densities are flatter than the quiescent spectrum. These observed features are consistent with a model of a uniformly expanding cloud of relativistic electrons or the shockin-jet model. Our 327 MHz data set also overlaps with a rare form of variability—symmetric achromatic variability (SAV)—seen at higher frequencies (.15 GHz) toward the source. SAV is possibly due to gravitational milli-lensing of the core emission by an intervening massive object, and is expected to be detected at all frequencies. No variability in association with the SAV events is seen in the 327 MHz data set; however, if SAV is due to the lensing of core emission alone, then the expected variability is less than 3r uncertainty in our measurements.
+ Read the publication